Playboy Beer Garden located at Balewadi High Street was launched by PB Lifestyle Ltd. which is the master and exclusive license holder in India for Playboy Enterprises Inc., USA.

Thanks to the lovely ladies at Carpe Diem, The BTeam got an invitation for a food tasting! Everybody geared up and were set for the evening.

We had a few mocktails to begin with. The Very Berry Smoothie was made using apple juice, raspberry & blackberry puree, yogurt and vanilla sugar. It was mildly sweet and was the best drink for me.

The Wake Me Up was made using fresh watermelon and mint shaken with orange and apple juice. It was a good old cool drink with watermelon base and a punch of mint.

The food started with the Watermelon Feta Cups which was the amuse bouche. An amuse bouche is a single bite sized hors d’oeuvre. The term is French, literally translated as “mouth amuser.” The watermelon cups had some crumbly feta, sweet basil and was sitting upon a balsamic reduction. It was a good start to kick off the palate.

An egg prepared dish called The Egg Decker came next. It consisted of a crisp and golden hash brown upon which was laid the spinach mornay, scrambled egg and a cheddar fondue. The spinach mornay which had the creamy béchamel along with the scrambled eggs went really well with each other. The hash brown added the crunchy element to this and the cheddar fondue took it to the next level. The side of grilled tomatoes and potato wedges was amazing.

The appetizers started with the Roasted Balsamic Beetroot Salad. It had a small beetroot ring topped off with crumbly feta, candied walnut and rocket lettuce. This was a well-balanced dish as I was expecting the feta to overpower everything. But the use of candied walnut gave the dish a much needed balance.

The Baby Patatasbravas had half cut and baked potato and served with a garlic aioli. They were tangy and the garlic aioli tasted really good.

The Bean and Chevre Crostini came next. It had a mashed beans quenelle on top of the bread and served with a side of potato straws. I liked the beans mixture which was creamy. It had a great texture as well.

The Hooters Style Chicken Wings were tossed in a BBQ Sauce. I am not a chicken wings person so I didn’t quite like it. But all of my fellow blogger buddies seemed to enjoy it.

The Paneer Hariyali Tikka was marinated in yogurt, mint, coriander and green chilli. The paneer cubes were thickly cut because of which I felt that the flavours were not infused in the paneer as much as I would have liked.

The Lamb Gilafi Seekh was another disappointment for me. It was supposed to be a lamb and cheese kebab marinated in mild spice but the cheese was nowhere to be found and it tasted very salty. However, there was a vegetarian variant of this which was amazing. It had a smooth texture and melted cheese. It just tasted brilliant.

The Tres Mushroom Slider had the wild, porcini and shitake mushroom patty with a mayonnaise. I found it to be a pretty decent slider but it can be improved with just a hint of a sweet element. 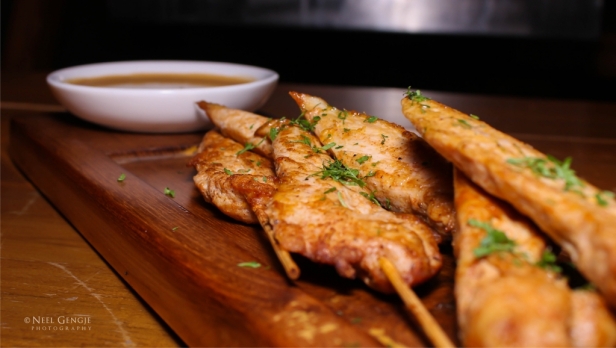 We also had a Devilled Chicken Satay which came along with a side of a peanut sauce. The chicken was skewered and was soft & tender. However, it didn’t have a lot of flavours. Although I liked the side of the peanut sauce. The Nachos which came next were topped off with garbanzo beans, feta, pomegranate and a creamy cheddar cheese sauce. I am always on a hunt for nachos all over town and these ones tickled my taste buds. They nacho chips didn’t turn soggy even after sitting in the cheese which is why I thought they were heavenly.

The Cagliari Pizza was a delight. It was a thin crust pizza baked to perfection and was topped off with vine ripened tomatoes, coarse pesto, wilted spinach, feta, red onion and elephant garlic.

For the mains, we started with the Penne with Smoked Cherry Tomato Sauce. Personally, I loved the sauce. There was just enough sauce to coat the penne which is how I prefer to have my pasta. The sauce was really rich with a hint of sweetness from the cherry tomatoes. It was topped off with parmesan cheese.

The Champagne Risotto with Asparagus was pretty decent. It was made using Arborio risotto, parmesan & asparagus and finished with champagne.

The Braised Tofu Clay Pot wasn’t good enough for me. It was a braised tofu tossed with black bean sauce, chilli and mushroom. I thought the tofu wasn’t so fresh and the flavours were a little confused.

We next had the Cottage Cheese Moussaka with Harissa. I didn’t like the use Harissa fondue here. It made the dish a little bitter. However, the cottage cheese was cooked well and was pretty tender.

I wasn’t able to have the Chicken Cafreal with Fondant Potatoes and Chili Jus but here is a photograph of the same.

The Veg. Green Thai Curry was beautiful. It had a beautiful aroma and lots of fresh veggies. It was served with a bowl of rice. The curry had a mild flavour and was subtle on the palate.

For desserts, we had the Banoffe Pie which I thought was out of the world. Golden brulee bananas, sticky toffee and chocolate curls in a tart was a match made in heaven. We were left fighting for the last slice of the pie.

The Mango Cheese Cake looked absolutely heavenly. It was a baked Philadelphia cheese cake with fresh alphonso mango. However, the plate had already been polished off by the time it reached me.

The Mixed Berry Eton Mess was a classic English dessert which had a meringue, fruit puree and cream. I liked this mainly because the creamy part was well balanced by the crunchy elements in it.

There was a 6 shot platter called the Brain Freeze and many other cocktails which I enjoyed photographing since I am a non-alcoholic.

A good experience altogether with a little ups and downs but we all ended on a happy note. A big shout out to Carpe Diem for giving us this fantastic opportunity and experience & Playboy Beer Garden for hosting us and providing us with amazing food and drinks.

Disclaimer: The invite was for a complimentary food tasting event. This review is a narrative of my experience at the event. The views expressed in this review are solely mine and others are more than welcome to agree or disagree with the same. The review is in no way influenced either personally or commercially nor has it been lifted, copied or plagiarized from any source however I have done my due diligence on the event via publicly available information on the internet.